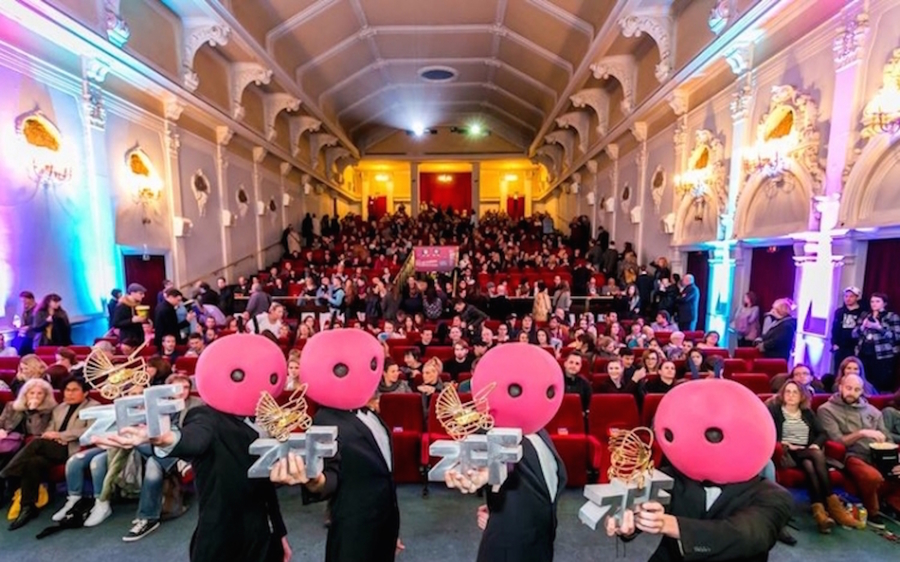 Zagreb Film Festival is focused on the presentation and promotion of debut films and new filmmakers. This year for the first time, instead of traditional October, festival takes place in November, 14–22 November 2015. On the usual city locations (cinemas Europa and Tuškanac, MSU, Zagreb Dance Centre etc.). By year we count near 60,000 overall audience, at screenings round 30,000. In the last few years ZFF, thanks to the management of Cinema Europa and distribution of independent European and global films, became a year-round cultural event stretching beyond the borders of the Croatian capital and presenting its programs all over the country. The media value of Zagreb Film Festival in 2014 is estimated at 18 million kuna.
13th edition takes one day longer which means more screenings, films and programs. The main competition program will offer feature and short fiction films while documentary films will be shown only in off-competition sections. Checkers, program that presents the latest Croatian short film production, are celebrating their 10th birthday this year with additional events and activities. My First Film, as selected by film critic Nenad Polimac, this year includes five debut films by acknowledged Bosnian and Herzegovinian directors, The Great Five, traditionally, comprises five select works from five of the finest European cinemas (United Kingdom, Germany, France, Italy and Spain). Categories Bib for Kids and Bib PLUS will present films for children and young audience. Film devotees will surely be thrilled at the news that we are celebrating the 100th birthday and 30th death anniversary of Orson Welles with a retrospective of his films, as this director relates a large part of his work to Croatia. The film program will be accompanied by an exhibition and a publication of a collection of Orson Welles’ interviews to the local media.

Aside from the film program, in the last three years ZFF has been intensely developing its INDUSTRY section: workshops, lectures and meetings of film professionals with the aim of extra training and education of future and current filmmakers.

Industry includes the 4th edition of My First Screenplay workshop, organised for filmmakers writing a script for their first feature film. The three previous editions included altogether 18 projects from different European countries, many of them on the safe road of realisation. For example, this year, Croatian projects Zbornica by Sonja Tarokic´ and Garbura by Josip Žuvan (2013 participants), as well as the script of The Katanga Man by last year’s participant Radislav Jovanov Gonzo, were allocated funds by the Croatian Audiovisual Centre for project development. Besides, an open call for scholarships for an MFA program of the prestigious Sarajevo-based film.factory, whose curriculum was designed by one of the greatest directors of today, Béla Tarr, was recently opened. The scholarship covers the entire tuition for a two-year course (amounting to Euro 25,000), and ZFF is awarding it (in association with film.factory) to one applicant from Croatia.

Cinema Europa is an iconic Zagreb movie theater and a protected cultural heritage and national treasure of the Republic of Croatia. It was commissioned by the wealthy Zagrebbased Müller family and built by architect Srec´ko Florshütz in 1924/25. The City of Zagreb bought the cinema after a successful campaign organized by Zagreb Film Festival and Croatian Film Association.
In the early 2008, ZFF was entrusted with the managing of the Cinema Europa in order to turn it into a regional center of cinematic art. Ever since, it has nurtured a program that makes it the leading regional institution for screening of independent contemporary films and a venue for almost all festivals and events in Zagreb. The cinema currently consists of a large auditorium with 500 seats; Müller Hall with 80 seats; a gift shop, two lobbies accommodating exhibitions, performances, music events, small-scale events and lectures, a bar and a space where audience can mingle before and after events; and offices of Zagreb Film Festival. The activities and programs of Cinema Europa are supported by the City of Zagreb, Croatian Audiovisual Center, Ministry of Culture and Ministry of Entrepreneurship and Crafts. As our efforts have been recognized by EU institutions, in 2008 Cinema Europa became a full member of Europa Cinemas Network and the International Confederation of Art Cinemas (CICAE). Our programs are also supported by European Union’s MEDIA program. In 2013, the Ministry of Culture passed the Decision declaring Cinema Europa a protected cultural heritage and national treasure of the Republic of Croatia.

We’ll continue with development of the program’s quality, and work on expanding the festival’s activities throughout the year and in other Croatian areas. We will continue to insist on cooperations with other institutions in order to realize programs with high standards, e.g. a cooperation between Academies of Dramatic Arts in Belgrade, Sarajevo and Zagreb (which we initiated in 2013), a cooperation with European Parliament (Lux Prize) and Media Business School or Erich Pommer who will conduct an intensive workshop. Part of our program should be presented during the whole year (some workshops, espe - cially Bib for Kids, and masterclasses).
Long-term plan is to be networked with other cultural institutions. We have been collaborating with European cultural institutes in Croatia (EUNIC) for years, and now our aim is to further develop this network of collaborators, with an exchange of branding and cultural contents. Part of this network would also include public libraries, restaurants, bars, mediatheques …