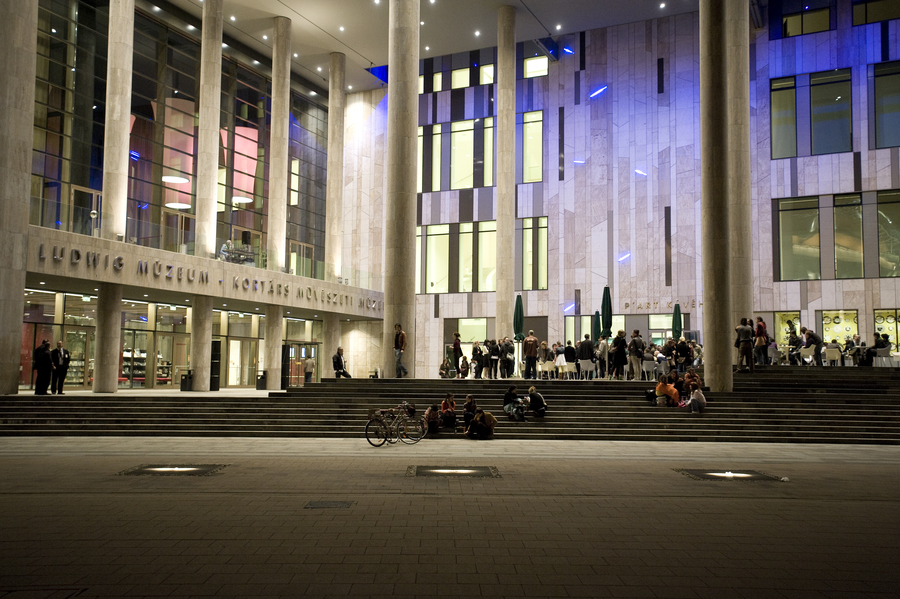 The Ludwig Museum – Museum of Contemporary Art is the only public collection in the country that presents local and international artists on a common platform. Thus, as a regional centre in Central Europe, it plays a decisive role in contemporary art scene.

The German couple, Irene and Peter Ludwig, founders of the Ludwig Museum, Budapest, had a collection of more than twelve-thousand pieces of artworks ranging from the Antiquity to Contemporary Art. Works of art that had been donated or lent by the Ludwigs, are on display at 30 museums worldwide, including institutions in Budapest, Cologne, Vienna and Beijing.

Since 2005 the Ludwig Museum is housed in the impressive building complex of the Palace of Arts, and occupies 12,000 square meters. As a main institution of both local and international art scene, the museum dedicates itself to the continuous research as well as to the presentation of remarkable results, radical turning points and important artists of contemporary art. The museum regards its primary task to mediate contemporary art, also to provide a qualitative selection, as well as to present such artistic position, that sensitively reflect social, artistic and philosophical problems. Due to its popular programmes (programmes inspired by the allied arts, educational lectures, exclusive events, museum education workshops), also to its activities intended for professionals (curator training, museum educational and museological research, artist-in-residence programme) the Ludwig Museum has become a decisive factor regarding both Hungarian and regional visual culture.

Revolutions | Revolution, anarchy, utopia
17 October 2014 – 4 January 2015
An exhibition that, regarding time, spans from the 80’s to present days and, regarding space, focuses mainly on Central and Eastern Europe, presents and elaborates the “revolutionary thought” through particular radical gestures of contemporary art.

//////////fur//// NO PAIN NO GAME.
12 March – 3 May 2015
Cooperative and interactive exhibition on passion for gambling organized in coope ration with the Goethe Institute, Budapest.

Photos by Vilmos Zsigmond
(Organised in the framework of the Budapest Spring Festival)
10 April – 21 June 2015
A selection from the lifework of the Hungarian born photographer and cinematographer who gained international reputation and even won an Academy Award.

Extravagant Bodies: Extravagant Age
28 May – 2 August 2015
The exhibition that is realized in cooperation with international partners, identifies the issue of old age as something that makes visible the premises on which contemporary society is founded, and, at the same time opens up possibilities of their critique.

Ludwig Goes Pop
September 2015 – January 2016
A travelling exhibition developed within the international network of Ludwig Museums worldwide, will be shown in several European cities. It presents pop-art tendencies both in Western and Eastern Europe

interior usable area of the museum building:
Partners of the Ludwig Museum are offered access to the exclusive museum premises for company event
purposes.